At the Round Table with Exclusive Expert Stephen B. Heppe, DSc

Most don’t think about how integrated GPS technology is in our everyday actions. From dialing 911 to find our location, tagging friends on social media at a restaurant or tracking flights, it’s become a necessary tool that continues to evolve.  Our guest, Dr. Stephen Heppe, is one of the leading experts in this field.

In this episode of Discussions at the Round Table, Dr. Heppe talks about his 40 years of experience in the areas of telecommunications, electrical engineering, radio/radar, unmanned aircraft, and GPS/GNSS. He discusses his rewarding start at InSitu working with UAVs and communications and developing drones for the U.S. military. With over 50 cases of patent disputes, he shares his insight on what a successful attorney client and expert witness consultant relationship looks like. To round out his discussion, he forecasts technology changes in GPS and hints at his new projects with stratospheric airships and truth-telling on the Internet, which are further developed in his blogs here.

This is an episode you don’t want to miss!

Note: Transcript has been lightly edited for clarity.

Announcer: This episode is brought to you by Round Table Group, the Experts on Experts®. We have been connecting attorneys with experts for over 25 years. Find out more at roundtablegroup.com.

Dan Rubin: Hello, this is Dan Rubin with Round Table Group, the leading customized expert search and referral service at Round Table Group. Our extensive expert witness network includes some of the top experts in the world. A select handful of whom are exclusive to us. Among those preeminent exclusive experts is Dr. Stephen Heppe, who I have the distinct pleasure of introducing to you today. Dr. Heppe, your CV is available on the Round Table Group website, but can you describe the highlights?

Stephen Heppe: My career is centered on electrical engineering and computer science, but that includes a bunch of sub-topics like GPS, radio, communications, military and civilian SatCom, computer networks, and cellular networks like cellular telephones that we all use today. I have been lucky. I have had great colleagues and mentors. I have been part of several companies over the years that have been at the forefront of some of the most revolutionary changes in these fields over the last 40 years. For example, I spent 16 years at Stanford Telecom, which was one of the earliest companies developing Global Positioning Systems (GPS) Technology for the military and I helped develop one of the first precision guidance systems for military aircraft.  I have worked on international standards for GPS augmentations we all use today. More recently. I was the Chief Scientist at Insitu, which is now part of Boeing. Insitu is one of the early success stories in small drones or UAVs. Our first fielded product Insitu was called ScanEagle, which has been widely used by the Marines, the Middle East, and by the US Navy.

Dan Rubin: Tell us more about your experience with UAV’s at Insitu. How did that evolve?

Stephen Heppe: It was back in 2002. My old roommate from Princeton had become the CEO of Insitu and he needed a precision GPS navigation system for the aircraft. It needed to fly itself into a vertically suspended cable that was hanging over the side of a ship. That can be a challenging problem. The UAV or the drone is being buffeted by the winds the ship is pitching and rolling in the waves. To hit that cable, it turns out that was a tricky proposition back in 2002. I joined the company at that time to work on that problem and was able to achieve and develop a system that achieved about a 1-centimeter navigation accuracy as it approached the rope. I also worked on the development of the radio and video downlink system for the aircraft, the ground communication system, and the fiber optic data distribution system.

Dan Rubin: That sounds like a varied portfolio, to say the least.

Stephen Heppe: It was exciting and rewarding, especially after the Marines selected us to help them in the Middle East back in 2003.  I have always liked small companies and Insitu was a small company at that time. Small companies innovate quickly, and each person gets to try their hand at many different tasks. It helps to develop the engineering staff and helps to promote the overall engineering community as we move forward.

Dan Rubin: How do you see GPS evolving in the future?

Stephen Heppe: We are using GPS in ways that were never conceived of when the system was first developed in the 1960s and 1970s, which is great. As we are finding new ways to use GPS, we are also uncovering some vulnerabilities that we did not fully appreciate at the time. For example, it is possible to transmit signals to a GPS receiver that will fool the GPS or spoof it into thinking that it is a different time or place, and that can be devastating. If the GPS receiver is being used for important navigation functions, or if the data from the GPS is being reported to a government agency or a third party that needs that information for safety purposes. This can be a devastating problem.

Dan Rubin: Is that spoofing difficult to do?

Stephen Heppe: In the early days, it was finicky and expensive, but as technology developed, it has become rather easy to pull that off and there have been several examples. In the literature and in practice where this has occurred, it can be a significant problem, and because most of the GPS receivers these days are either embedded in cell phones or connected to the Internet, that opens up additional trapdoors and avenues for attack.

Dan Rubin: How do we fix the spoofing problem?

Stephen Heppe: GPS has also evolved, and the new GPS downlink signals have some features in them that can be leveraged to add authentication and watermarks if you will. It can be used to provide some protection against these sorts of attacks, while the general capability to implement those features exists in the new signals. Those capabilities have not yet been fully implemented, so over time and the next 10 or 20 years, I am expecting that will be perhaps the next big revolution in GPS.

Dan Rubin: What other expertise do you bring to bear besides GPS?

Dan Rubin: How did you get started in communications?

Stephen Heppe: Well, I built my first radio in middle school and I was doing optical communications in college, which was early to be doing optical communications back in 1977. At Stanford Telecom, I worked on virtually every fielded Department of Defense and NASA space project you can talk about in the open literature and some that were never fielded like Reagan’s Star Wars system for example.

Dan Rubin: Was all that experience space based?

Stephen Heppe: Initially, most of it was, but over time I evolved into aeronautical communications and the Internet. After the Soviet Union collapsed around 1990, I started to transition to aeronautical communication problems for the Federal Aviation Administration (FAA).  I also provided some support to Globalstar and Iridium which are satellite-based systems, but in a sense, they are also elaborate cellular telephone communication systems using satellites instead of base stations. Many of our GPS applications today depend on cellular technology.

Dan Rubin: Can you give us some examples of that?

Stephen Heppe: Almost all of us have a GPS receiver in our cell phones today. Those are used for mapping navigation and safety functions, so when you dial 911 for example, your phone can report your position to the public safety access point and they can give it to the ambulance driver or the police or whatever. That receiver is assisted by data that is transmitted over the cellular networks and when you share your location, of course, you are also using cellular networks and Wi-Fi networks to move that data around. This gets used for fleet tracking applications. When you share your location with your friends. When you annotate photos and so on, it is all connected.

Dan Rubin: Let’s turn to your experience as an expert witness. Can you summarize that background?

Stephen Heppe: I have been working as an expert witness off and on for about 20 years now. I usually handle a few cases a year. So far, I have handled about 50 cases. They involve a variety of topics, patent infringement. IPR’s breach of contract, and theft of intellectual property. I have even gotten involved in a few personal injury cases that involve GPS. Most of these cases involve at least an expert report and a deposition later. Eight or nine of them have gone to trial in state or federal court, or a hearing at the International Trade Commission.

Dan Rubin: Based on that experience, how do you like to work with a legal team?

Stephen Heppe: I think coordination is important there. There may be things that the legal team needs to keep from a technical expert from time to time, but part of my role as a technical expert is to help the legal team avoid technical rabbit holes, unwinnable theories, and technical dead ends that can slow them down or potentially threaten their case. Getting an early start and coordinating closely with the legal team maximizes the likelihood of a desirable outcome. I think it also tends to minimize overall costs for the client because it avoids wasted work.

Dan Rubin: Do you like to write your own reports?

Stephen Heppe: Yes, I am pretty good at it. I usually prepare the first draft and then I do a few cycles with the legal team to refine the report and make sure that I have addressed all the issues to their satisfaction.

Dan Rubin: What’s the advantage of writing your own reports?

Stephen Heppe: By building my report within the scope the legal team defines, I guarantee that I am familiar with all the evidence affecting my opinions in the case, and I am confident that I can also stand behind every sentence in the report. I am assured because I have written the report and worked through all the technical arguments, my opinions are well supported by the evidence, and I can handle any question that comes up at deposition or trial.

Dan Rubin: Dr. Heppe, thank you so much for your time today. Do you have any final words for our audience?

Stephen Heppe: I have been very fortunate to have a varied career. It is more than just GPS and communications. I am now pursuing some projects involving stratospheric airships and robotics. I am very excited about my newest project, which is related to truth telling on the Internet. Please check out my CV and the blog entries and reach out to me through the Round Table Group. 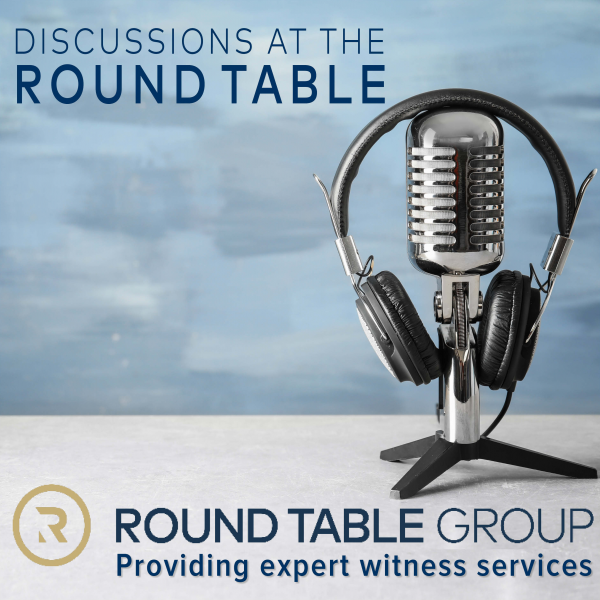 Our aerospace, aeronautics and aviation expert witnesses, speakers, and consultants are scholars, researchers, and professionals with extensive knowledge in a broad array of disciplines including engineering, materials, systems, failure analysis, and safety. Topics of interest and areas of expertise include but are not limited to aviation, aircraft engineering and design, propulsion, performance, flight dynamics, flight systems, simulations, aircraft failures and accident investigations, and more.

Robotics is the branch of technology that deals with the design, construction, operation, structural disposition, manufacture, and application of robots. electro-mechanical machines, which are usually guided by computer and electronic programming are part of robotics.

Telecommunications is the system of exchanging information over a great distance by cable, telephone, telegraph and broadcasting. The telecommunications industry in today’s world has often been compared to the body’s central nervous system. Both have complex systems that connect one area to another by sending signals. The communications industry, according Statista.com, had a value of $1.4 million in 2017 and is estimated to grow to $1.46 billion by 2020.